When you think of John Wayne, you may get an image of a cowboy drinking rotgut rye out of a dusty saloon glass, but in actuality The Duke was quite a spirits connoisseur. In fact, his favorite drink was fine tequila, and he carried crates full of bottles of the good stuff with him on shooting locations in the middle of nowhere since they could last for months.

Wayne also had a fondness for good bourbons, but in the ’50s and ’60s, Kentucky bourbons were tough to come by west of the Mississippi. So one of his hobbies was blending different whiskeys to create his perfect recipe. Wayne’s son Ethan accompanied him on set for 17 years, and the younger Wayne remembers loading and unloading those heavy cases of bottles in the family station wagon.

When John Wayne passed away in 1979, his estate’s executors immediately locked up the actor’s house while probate conflicts played themselves out. After years of squabbling, Ethan finally found himself in possession of some of those crates, which were over three decades old. To his surprise and delight, the heaviest of the 40 containers was still full of booze.

Even more importantly, The Duke had left behind his blending notes and favorite recipes. While there certainly wasn’t enough archival whiskey left for a commercial release, Ethan knew he was on to something. John Wayne is a quintessential American brand in and of himself, and the possibility of combining it with bourbon was too good to pass up.

Ethan knew that he needed to have some additional expertise to augment his father’s notes, so he partnered with California winemakers Jayson Woodbridge and Chris Radomski to start up Duke Spirits. The new partners brought their own resumes of success to the venture from their experience creating Hundred-Acre Cabernet Sauvignon and the Layer Cake line of wines.

Working from The Duke’s notes and some examples of his personal blends, the winemakers used their talented palates to craft a new version of what they believe the senior Wayne would have appreciated. Sourcing from several unnamed Kentucky distilleries, and primarily from Wayne’s two favorites, the team at Duke Spirits has created an 88-proof bourbon that has recently been introduced to Middle Tennessee by Lipman.

Priced in the lower premium bourbon price range of $32-$35, Duke Bourbon is bottled in small batches from blends supervised by the members of the team. The result is a very aromatic whiskey with plenty of cinnamon, vanilla, citrus and even tea on the nose. John Wayne believed in drinking whiskey with his meal occasionally, so it’s no surprise that these sort of spicy elements might be present in his kind of bourbon.

Although the whiskey is slightly overproofed compared to other more popular brands (making it an even better bargain), after the initial attack on the tongue, the finish is smooth and clean. The mouth feel is surprisingly delicate, but I’ll leave it to someone else to tell the Wayne contingent about that … 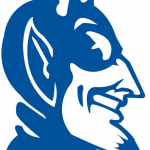 Although the batches are small, Duke Spirits says they have access to a fairly dependable supply to use in their blends. In an interesting development, one of the things that has delayed the rollout of The Duke was the fact that Duke University filed an objection with the U.S. Patent and Trademark Office over the use of their name. The university claims that consumers might confuse the use of the word “Duke” and the bold letter “D” with some of their athletic team mascots. Y’know, the Blue Devil that looks more like Zorro than any cowboy.

While you shouldn’t expect to see The Duke in North Carolina any time soon, it has been released in 14 states initially. Look for it in your favorite liquor store or bar and give it a try. It’s the American thing to do!