After doubling for Burt Reynolds for years, he turned to directing the actor in such fun-loving films as “Smokey and the Bandit,” “Cannonball Run” and “Stroker Ace.”

Hal Needham, a stuntman who dazzled Hollywood for years before directing his pal Burt Reynolds in such films asSmokey and the Bandit andThe Cannonball Run, has died. He was 82. 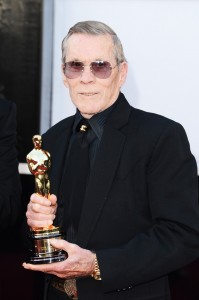 Needham, who received a honorary Oscar in November at the Governors Awards, died Friday in Los Angeles after a short battle with cancer.

Reputed to be the highest-paid stuntman in the movies, Needham garnered his first directing job in 1976 with Smokey and the Bandit after he approached Reynolds (he often doubled for the actor) with a yarn about a good ol’ boy and his trucker friend who must transport a load of beer across state lines. Reynolds loved the idea, and the stuntman found himself in the director’s chair — and a screenwriter to boot.

With ladies man Reynolds at his wisecracking best and propelled by hair-raising vehicular stunts, Smokey and the Bandit was a runaway box-office hit, raking in more than $126 million as the second-highest grossing movie of 1977. The action comedy also spawned two sequels and a series of telefilms.

Needham followed up with Hooper (1978), starring Reynolds with Sally Field. A story of a great Hollywood stuntman, it was stirred by Needham’s own adventures and featured 30 of Hollywood’s top stunt performers.

“I know one thing; I’ll never win an Academy Award. But I’ll be a rich son of bitch. And that’s what it’s all about,” he once told the Los Angeles Times. He took out ads in the trades, highlighting his films’ negative reviews but puncturing them with a shot of a wheelbarrow filled with money.

Needham though, did win an honorary Oscar. “I’ve never been presented anything this prestigious in my life,” he said after hearing he would be saluted at the Governors Awards.

Needham often ended his films by showing humorous outtakes during the credits. He eschewed “serious” film talk: “Directing, it’s a snap,” he once said.

The co-founder of Stunts Unlimited and a mentor to young stunt performers, he earned the Academy’s Scientific and Engineering Award in 1986 for the design and development of the Shotmaker Elite camera car and crane, which allows filmmakers greater versatility in shooting action sequences. (He also won an Emmy Award for inventing the devices.)

“My first job was as a treetopper, and I was so damn good at it they called me “Squirrel,” he told THRin an interview in November. “And then I joined the military and became a paratrooper. And later on in life I raced motorcycles and cars. So I had a pretty good background for it. Plus, I was a pretty good athlete. When I came in, Westerns were the big thing, so I did horse falls, transfers, bulldogs, big fights. That’s where you could really shine if you were really good at it. But then all the Westerns stopped, and I was capable of doing car stunts, motorcycle stunts and high falls. I could do it all. I worked every day. I never turned down a stunt.”

Needham said that during the course of roughly 300 movies and 4,500 television episodes, he broke 56 bones, including his back twice, punctured a lung, dislocated a shoulder and knocked out a bunch of teeth.

“I had to have a shoulder operated on, and that bothers me a little bit, but basically I’m in good shape,” he said in November.

The idea for The Cannonball Run was dreamed up by Needham during a heavy night of carousing and drinking with the organizer of the Cannonball Baker Sea-to-Shining-Sea Memorial Trophy Dash, an actual cross-country race in which anything on wheels is eligible.

Needham received co-writing credits for Smokey and the Bandit, The Cannonball Run and their sequels, plus another Reynolds’ starrer, Stroker Ace (1983), and Megaforce (1982).

“Hal Needham was a great stunt coordinator, director and an icon. I’m still grateful he took a chance with me in The Villain. I’ll miss him,” Schwarzenegger tweeted Friday. 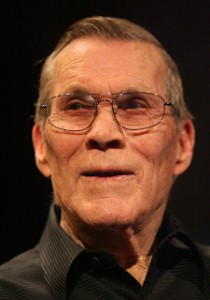 He also was the second-unit director on action scenes for The Longest Yard (1974) and White Lightning (1973).

Needham was born in Memphis on March 6, 1931. His family moved across the Mississippi to St. Louis and eventually settled in rural areas of Missouri. He left high school and joined the U.S. Army, where he specialized in testing parachutes and earned extra money by jumping at aerial thrill shows. In the process, he developed some of the equipment now used by skydivers.

After his discharge, Needham migrated to Orange County, where he was part owner of a tree service. He heard about the job of movie stuntman and landed a gig at Warner Bros. as a parachutist and airplane wing walker on Billy Wilder‘s The Spirit of St. Louis, which starred James Stewart asCharles Lindbergh.

He became Richard Boone’s stunt double on CBS’ Have Gun – Will Travel for 5 ½ years and rose to head stuntman on the popular series. For four years, the rugged Needham served as the billboard model for Viceroy cigarettes.

Needham met Reynolds on the late 1950s NBC series Riverboat. “I doubled him there and then moved over to Gunsmoke, and then he moved to the big screen and I doubled him for 14 years,” Needham told THR.

He was ingenious and ambitious in his stunt daredeviltry: For Little Big Man, he turned the standard jump from a stage into a much more elaborate affair. He leaped from his horse to a coach, then proceeded to do three consecutive jumps — to the wheel horses, to the swing horses, and finally to the lead animals.

Needham was a pioneer in developing rocket-powered vehicles for stunts. In one escapade, he was required to sail a tuck, aided by rockets, across as 112-foot drainage canal. His only protection was a seatbelt and harness. The truck had no roll cage. The vehicle landed past the canal, reaching a height of nearly 25 feet. Needham broke his back but considered it worth the effort — since more than 25 fellow stuntmen came to watch, a salute to his prowess.

At the time, Needham also created the boat jump record when he flew 138 feet over a Georgia swamp in Gator (1976), another Reynolds film.

His first vehicular stunt was of a more serious nature. Needham was the first human hired to test the effectiveness of automobile safety air bags. Wearing just a standard seat belt, he rode 20 mph lead-on into a brick wall. He subsequently testified before congressional committees on the safety of air bags.

For sheer relaxation, Needham had a need for speed. In 1977, he traveled 619.9 mph in an attempt to break the land speed record.

After accepting his trophy at the Governors Awards, Needham told the audience during his acceptance speech: “You know, you’re looking at the luckiest man alive. And lucky to be alive.”