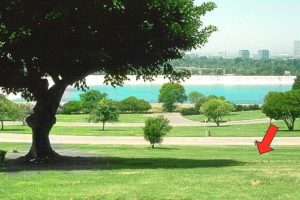 John Wayne was buried on an ocean-view hillside in Newport Beach more than 24 years ago, a private service from which dozens of fans were turned away by security guards.

For nearly two decades, Wayne’s final resting place remained nearly as private: The actor’s grave, on a grassy slope next to a sturdy shade tree, was left unmarked until 1998.

Even today, fans who drive to Pacific View Memorial Park in Corona del Mar are told that, out of respect for the family’s privacy, the cemetery will not disclose the location of his grave.

Without detailed directions, fans of the actor — whose 50-year Hollywood career made him an icon of the Wild West — would have a difficult time finding the place to pay their respects. Anyone with access to the Internet, though, can find a step-by-step map.